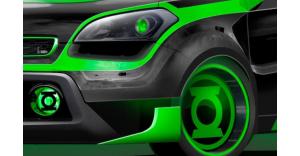 Kia Motors America (KMA) considers the 2012 SEMA Show as one of the most significant events in the US automobile market wherein the company could show off some of its vehicle models that were carefully customized so as to suit the tastes of the audience who would be attending the said show.

Since KMA regards the 2012 SEMA Show as a significant event, the car maker has teamed up with DC Entertainment. This partnership eventually gave way for the production of Kia vehicles that are inspired by DC’s “Justice League” characters. In addition to this, Kia has also collaborated with Super Street Magazine, RIDES magazine, and West Coast Customs.

KMA is actually planning to bring a total of seven Justice League-inspired vehicles and one of this was the Batman-inspired Kia Optima which was previously unveiled in New York City. Thus, it is quite correct to conclude that the vehicles that KMA would be placing on display at the 2012 SEMA Show which will be held in Las Vegas on October 30 was the product of the car maker’s alliance with DC and some of the most popular custom car builders.

KMA and West Coast Customs joined forces in creating the Kia Forte which is inspired by the Justice League’s Flash and the Aquaman-inspired Kia Rio 5-door. KMA and RIDES magazine worked together in developing the Batman-inspired Optima and the Cyborg-inspired Kia Forte 5-door. Finally, KMA nd Super Street magazine’s collaboration was responsible for the production of the Kia Soul that was inspired by the Green Lantern.

With these partnerships as well as the vehicles that were produced out of the alliances that were developed, KMA and all its partners wants to highlight the heroism that the iconic Justice League characters have shown to its audience. The awareness and the funds that these partnerships would generate were intended to benefit the “We Can Be Heroes” campaign which aims to help fight hunger in Africa.

The Justice League characters-inspired vehicles will then be auctioned to interested buyers by the end of the show and all of the money that will be raised will automatically be handed to the “We Can Be Heroes” campaign.

Marty Bay is the Lead Writer and Editor for VPM Automotive. He has researched and reviewed 100s of cars, and writes extensively about car technologies.
Follow Marty Bay on Google+
This entry was posted in Forte, Kia, Optima, Rio, Soul. Bookmark the permalink.