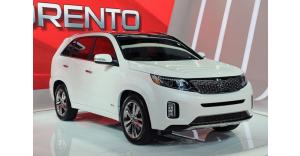 Kia Motors America (KMA) has finally unveiled the 2014 Kia Sorento at the 2012 Lon Angeles Auto Show which is the redesigned version of the outgoing model.

Upon unveiling the 2014 Kia Sorento, KMA has proudly announced that this vehicle was carefully redesigned to impress the buyers who have long been waiting to have a Sorento which is equipped with all the advanced features that the Korean carmaker could offer.

Based on the information obtained from a press release published on the official website of KMA, the 2014 Kia Sorento was the product of the series of upgrades that Kia’s engineers and vehicle developers have implemented on the vehicle three years after the company’s production plant which is located in West Point, Georgia started producing the mid-size crossover SUV for the North American.

KMA has also stressed out that the 2014 Kia Sorento was actually built to impress the buyers who are in need of a reliable mid-size crossover SUV. KMA has also boasted that the new version of the Sorento was built with a new chassis and a more sophisticated exterior styling cues.
The upgrades that were conducted on the vehicle’s chassis and exterior design was probably triggered by KMA’s desire to produce a model which is quite different from the other models that are included in the segment where bland utility is a prevailing trend. For the 2014 model, Kia’s engineers redesigned the Sorento’s fascias on the rear and front. Due to such changes, the 2014 Kia Sorento currently flaunts a lower and broader appearance in front while its rear projects a relatively wider stance.

Aside from the changes made on the exterior and the chassis, Kia has also equipped the 2014 Kia Sorento with an all-aluminum 3.3-liter Gasoline Direct Injected V6 engine which is good for 290 horsepower and 252 lb.-ft. of torque. In addition to this, the Sorento’s interior was significantly redesigned. The vehicle has also received the company’s next-generation infotainment. The 2014 Kia Sorento will also be the first Kia vehicle that would use the company’s latest blind spot detection system.

Given all of the changes made on the vehicle, KMA is quite confident that the 2014 Kia Sorento will emerge as one of the class-leaders on the mid-size crossover SUV segment since this will hit the market with a lot of desirable features to offer.