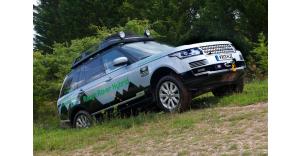 It was recently confirmed that Land Rover has finally decided to launch not one but two hybrid versions of the Ranger Rover at the 2013 Frankfurt Motor Show.

Based on the information provided by Land Rover, the two hybrid SUV models that the company would be launching at the Frankfurt Motor Show were the Range Rover and the Range Rover Sport Hybrids. The carmaker also stressed that these vehicles will still continue to offer the same performance provided by the conventional versions. The only difference is that the hybrid versions were designed to provide better fuel economy ratings as well as lesser CO2 emissions just like the other hybrid cars in the market.

Land Rover has also revealed that the upcoming hybrid version of the Range Rover and the Range Rover Sport Hybrid will come with identical powertrains. The carmaker stressed that these vehicles will feature three driver-selectable modes as well as the combination of the popular 3.0-liter SDV6 diesel engine and a 35kW electric motor which is integrated on the vehicles’ 8-speed ZF automatic transmissions. The vehicles’ hybrid system on the other hand is made up of the lithium-ion battery pack, an inverter and another electric motor that adds a combined weight which is less than 120 kilograms.

The carmaker explained that the electric motor used on both hybrids is capable of producing up to 170Nm of torque. With this output, the electric motor plays a vital role in boosting the vehicle’s acceleration and allows this to run in EV mode. In addition to that, the motor could also act as a generator for the vehicle by harvesting the kinetic energy released through regenerative braking. This also charges the battery when the vehicle is slowing down.

Aside from that, Land Rover has also shared that the Range Rover Hybrid and the Range Rover Sport Hybrid were built using aluminum. These are also based on Land Rover’s iconic Premium Lightweight Architecture.

Marty Bay is the Lead Writer and Editor for VPM Automotive. He has researched and reviewed 100s of cars, and writes extensively about car technologies.
Follow Marty Bay on Google+
This entry was posted in Car Buying Guide & Tips. Bookmark the permalink.