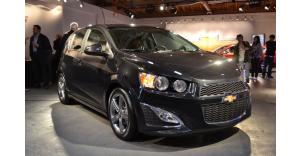 Chevrolet has recently took pride in announcing that many of its existing vehicle models in the market that bear the 2014 model year has received the 5-Star Overall Scores in terms of safety from the National Highway Safety Administration beating some of its closest rivals such as Toyota and Ford.

Based on the information provided by a press release that was published on the brand’s official media site dated September 20, 2013, seven of the Chevrolet models that bear the 2014 model year and are currently available in the market have obtained the 5-Star Overall Vehicle Scores from the NHTSA.

The brand on the said press release has also revealed that the models such as the Chevrolet Cruise, Impala, Volt, Traverse, Silverado 1500 Crew Cab, Camaro Coupe and the Sonic has received the NHTSA’s highest safety mark which is the 5-Star Overall Safety Score after these vehicles were subjected to the New Car Assessment Testing. Chevrolet also bragged that the Sonic was the first-ever and the only subcompact model that has successfully received such high mark.

Aside from the prestige that such accomplishments have brought to the models that were mentioned earlier, General Motors which is the parent company of