Mercedes Cuts the Price of the 2014 S-Class 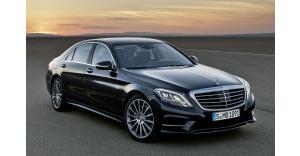 Mercedes Benz has recently confirmed that the price of its 2014 S-Class has decreased but the German carmaker opt not to use the term “price cut” to explain what had happened on the vehicle’s pricing.

Based on the information obtained from the German carmaker, the redesigned version of the 2014 Mercedes Benz S-Class will be sold at a starting price of $93,825 including the destination charge of $925. Compared to the previous year’s version, the current starting price of the S-Class is about $2,080 higher and Mercedes hinted that this was brought about by a number or reasons that the carmaker cannot easily divulge.

In addition to that, Mercedes has also revealed that the price of the range-topping 2014 S63 AMG 4Matic will start at $140,425 including the shipping charges. Given such price, the current version is cheaper compared to the rear-wheel drive 2013 S63 which is priced at $140,905.

When asked to comment regarding the so-called “price cut,” Mercedes Benz has refused to use such terms. Instead, the German carmaker chose to refer this move as the “price/value improvement of 2.8 percent vs. the outgoing model.” Aside from that, Mercedes also explained that the unlikely price cut was actually the carmaker’s way of defending its competitive position in the market.

But despite of the unusual decrease in the price of the 2014 S-Class, Mercedes Benz confirmed that the company is set to launch about 21 car and SUV models that would bear the prices that are beyond the $90,000 mark before the current year ends. The carmaker even pointed out that that this includes the Mercedes Benz CL550 4Matic Coupe and the SL550 convertible.

Mercedes Benz also boasted that despite of the price cut implemented on the S-Class, the company still has a few models that are currently on sale with prices that are higher than $200,000. A good example of this is the SLS AMG Black Series Coupe which is priced at $275,000.

Finally, Mercedes revealed that the base version of the 2014 S550 will be hitting the company’s showroom by October 15 and this will be followed by the launching of the 2014 S550 4Matic in November.

Marty Bay is the Lead Writer and Editor for VPM Automotive. He has researched and reviewed 100s of cars, and writes extensively about car technologies.
Follow Marty Bay on Google+
This entry was posted in Mercedes-Benz. Bookmark the permalink.