Nissan to Offer Extended Battery Warranty on the 2013 Leaf 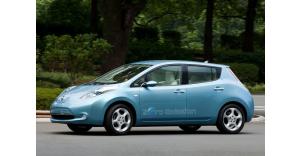 Confronted by a class-action lawsuit that was filed against the company over the alleged loss of battery capacity, Nissan has decided to offer an extended battery warranty on the 2013 version of the Nissan Leaf.

Nissan has also hinted that the extended battery warranty that the company is offering is only good for 60,000 miles travelled or five years, whichever comes first. To further educate the owners of the 2013 Nissan Leaf, Nissan has pointed out that the warranty is valid in the event that the 12-bar capacity of the Leaf’s battery falls to under nine bars within the warranty period, a figure which represents 70 percent of the battery’s charge.

In order to avoid possible issues that might emerge in the future regarding the extended battery warranty that the company is offering for the 2013 Leaf’s battery, Nissan has also highlighted that the main goal of the warranty was only to return the Lithium-ion’s charging to capacity to just nine bars and this was not intended to restore to 12 bars.

But aside from trying to appease the owners of the 2013 Nissan Leaf who might be presently experiencing the said battery problem, Andy Palmer who is the current executive vice president of Nissan was quoted explaining that the extended battery warranty was intended to boost the confidence of the consumers towards the vehicle and to the company as well by assuring them the Nissan is very much willing to return the Leaf’s battery charging capacity to nine bars despite the fact that the battery capacity loss is quite normal as long as the problem occurs within the warranty period.

As of the present, Nissan is offering the extended battery warranty on the 2013 Nissan Leafs that are sold in the US. However, the company will also offer the same warranty in the several countries in Europe and in Japan soon. Finally, Nissan has also hinted that the company is looking for ways to further extend this warranty on the 2011 and 2012 models of the Leaf probably before the next summer.