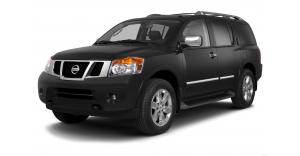 Despite the tougher regulations that were intended to encourage carmakers to produce more fuel-efficient vehicle models, Nissan has recently confirmed that the company has no plans to downsize the truck-based Armada.

Based on the information obtained from reliable sources, Nissan strongly disagrees with the idea of downsizing some of its existing vehicle models particularly the Armada in order to comply with the existing regulations that were implemented to reduce the fuel consumptions of the vehicles that are sold in the market.

This is because Nissan have learned that there is still groups of buyers who are demanding for bigger SUVs due to the comfort, safety and other benefits that this type of vehicles provide. Nissan hinted that the idea of downsizing the Armada would most likely affect the model’s sales since the carmaker have known that such groups of buyers will most likely not settle for anything less and this could mean looking for other vehicle options in the event that the Armada would be downsized.

In addition to that, Rich Miller who is the current chief product specialist for the Nissan Armada and the Titan pickup truck in North America pointed out that reducing the sizes of their SUVs and trucks would discourage the company’s potential buyers from purchasing their product since these consumers still need the vehicles’ relatively larger sizes and impressive towing prowess. But since the existing regulations are stricter than before, Miller highlighted that there is actually a great need for the company to become more innovative and reduce the fuel consumption of the Armada and other larger models without the need to revise their sizes.

Given such dilemma, Miller revealed that Nissan is planning to look for other strategies that could help the company boost the fuel economy of larger models such as the Armada. He also hinted that the company is considering the use of more lightweight materials in building the Armada as well as increasing the number of its transmission’s speeds. In addition to that, Nissan is also planning to improve the aerodynamics of the Armada by using air deflectors and other ground effects in order to reach the determined goal.

Marty Bay is the Lead Writer and Editor for VPM Automotive. He has researched and reviewed 100s of cars, and writes extensively about car technologies.
Follow Marty Bay on Google+
This entry was posted in Armada, Nissan. Bookmark the permalink.