Nissan Works on the Self-driving Version of the Leaf 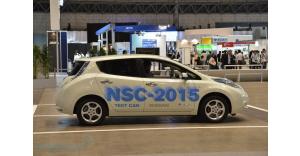 Nissan has recently unveiled the self-driving version of the Nissan Leaf and the company currently refers to this as the “NSC-2015.” At first, a lot of car experts believed that this vehicle was designed to target the “autonomous car’ or a modified version of the Toyota Prius that was developed by Google. However, they have recently known that the NSC-2015 might not be able to match the actual performance of Google’s autonomous car since the former is not capable of running by itself on public streets. This simply means that the NSC-2015 was built to perform a limited number of self-driving functions.

Based on the information obtained from Nissan, the NSC-2015 was a modified version of the Nissan Leaf which is equipped and connected to an exclusively-designed set of computing services. This connection only allows the vehicle to perform the self driving function as well as warn its driver of the presence of car thieves.

Nissan has also stressed out that the self-parking function of the NSC-2015 will only work on parking lots that are designed specifically for robotic cars such as this. When perfected, the NSC -2015 would allow its driver or owner to save time since the vehicle could possibly park itself and return to pick its owner or driver up. The driver could also remotely control the vehicle’s functions with use of a smartphone which is connected to an Automated Valet Parking technology.

The security function on the other hand allows the vehicle to sense the presence of thieves and catch them by surprise. Nissan’s engineers revealed that the NSC-2015 is equipped with a camera that could monitor the vehicle’s surroundings. This camera could also sense and react to suspicious activities that are happening on the vehicle. Upon sensing a probable security threat, the vehicle will then trigger an alarm system that would alert the driver and at the same time deter car thieves away.

Given these useful functions, the NSC-2015 will most likely be considered as a significant breakthrough for Nissan. However, the company’s engineers and developers are still working on some of the other functions that the NSC-2015 would be providing. Thus, Nissan expects that this vehicle will probably become viable by 2015.