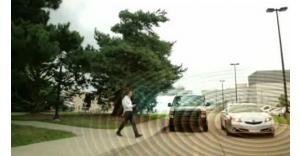 Honda has recently held a meeting in the city of Detroit and this was conducted to allow the Japanese carmaker to present some of its vehicles’ upcoming features.

During the meeting, Honda’s representatives were able to present two of the most promising safety technologies that the company is developing. Although the Japanese carmaker was quick to point out that these technologies are still on the research phase, the company’s personnel still presented a video that reveals the features that Honda’s new Vehicle-to-Pedestrian (V2P) technology and the Vehicle-to-Motorcycle (V2M) are trying to offer.

On the course of the presentation, Honda’s representative explained that the primary basis of the V2P and the V2M technologies is to allow the upcoming Honda car models to talk to various potential accident targets such as motorcyclists and pedestrians. In order to allow the company’s upcoming car models to do such, Honda has built its own system which uses the so-called “Dedicated Short-Range Communications” which is a form of wireless communication that incorporate GPS functions and already approved by the Federal Communications Commission.

Using the Dedicated Short-Range Communications, a Honda vehicle which is equipped with the V2P and V2M technologies could easily communicate with pedestrians with a specific app on their phone and motorcyclists with similar technologies installed on their motorbikes. What the technology would be doing is to alert the driver of the V2P-equipped Honda car when a potential pedestrian is at risk of being struck by the vehicle. Through this function, the driver of the Honda vehicle could easily apply the brakes and prevent an accident from happening. The V2M technology also works that way.

Unfortunately, Honda has confirmed that such technologies will still not be included on the vehicles that the Japanese carmaker would be launching in the next few years. This is because Honda is currently stuck on the research phase and the company confirmed that there are still a lot of challenges that must be resolved before such features would be included on most of its vehicle models on the market.

But despite of the lack of clear timeframe as to when these technologies would be available, many car experts were quite impressed with the efforts that Honda is investing to further improve the safety features of its cars in the market.

Marty Bay is the Lead Writer and Editor for VPM Automotive. He has researched and reviewed 100s of cars, and writes extensively about car technologies.
Follow Marty Bay on Google+
This entry was posted in Car Technology, Honda. Bookmark the permalink.