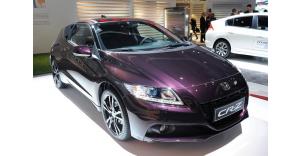 Honda has confirmed that the company has finally decided to increase the price of the 2013 Honda CR-Z and this decision was basically brought about by the upgrades that the Japanese car maker’s personnel have implemented on the vehicle.

Based on the pricing information provided by Honda, the base model of the 2013 Honda CR-Z will be sold at a starting price of $20,765 including the destination charge of $790. The starting price of the base 2013 Honda CR-Z clearly reflects an increase of about $280 compared to the outgoing model which is sold at $20,485 including the shipping charge of $790.

According to a number of reliable sources, the increase in the price of the 2013 Honda CR-Z was actually triggered by the upgrades and improvements that were implemented on the vehicle. A good example of this is the use of a new lithium-ion battery pack on the CR-Z which is expected to boost its running performance as well as the vehicle’s capability to store more charges.

As of the present, the 2013 Honda CR-Z is powered by a 1.5-liter 4-cylinder engine which is connected to an electric motor. The upgrades that were implemented on the CR-Z particularly the use of a new lithium-ion battery pack with higher-voltage capacity has also increased the level of assistance that the electric motor provides for the 4-cylinder engine. Thus, the maximum power output generated by the 2013 Honda CR-Z was stretched to 130 horsepower from the previous year’s 128 horsepower.

Honda has also estimated that the 2013 Honda CR-Z which is equipped with the standard 6-speed manual transmission will obtain the fuel economy ratings of 31 miles per gallon in the city and 38 miles per gallon on the highway reflecting a gain of 1 mpg over the previous year’s model.

Marty Bay is the Lead Writer and Editor for VPM Automotive. He has researched and reviewed 100s of cars, and writes extensively about car technologies.
Follow Marty Bay on Google+
This entry was posted in CR-Z, Honda. Bookmark the permalink.