Production of Updated 2013 Nissan Leaf in the US Started 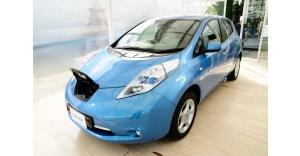 Nissan has recently confirmed that the company has started building the updated version of the 2013 Nissan Leaf on its flagship plant in North America which is located at Smyrna, Tennessee.

Based on the information obtained from the company, Nissan is currently aiming to increase the sales volume of the all-electric hatchback Leaf but this goal didn’t stop the car maker from fulfilling its plan which is to build the vehicle in the US. In fact, the production of the car as well as the batteries in the Smyrna plant has already started recently.

Nissan’s decision to move the production of the Leaf in the US might have been triggered by a lot of factors and one of these might have been the continuous appreciation of the Japanese currency which makes the idea of importing the Leafs sold in the US from Japan less profitable for the company.

Last year, Nissan’s dealerships were able to sell a total of 9,819 units of the Leaf in the US and all of these were built and imported from Japan. Since Nissan has only achieved minimal gains from the previous setup, the company was finally convinced to commence the production of the all-electric vehicle in Smyrna.

But aside from shifting the production of the Leaf from Japan to the US, the Nissan’s personnel have also implemented a few upgrades on the Leaf. One of the most significant upgrades that were conducted on the Leaf was the availability of the 220V charger on the existing trims of the Leaf except for the S model. In addition to that, price of the entry-level S model of the updated 2013 Nissan Leaf built in the US was also reduced.

The top-of-the-line SL model of the Leaf that rolls out of the company’s Smyrna Plant is now equipped with a 360-degree camera, audio system from Volt, and leather seats. Aside from that, all of the models included on this year’s lineup would be offered with two new exterior shades and the revised rear wheel designs.

Given all of these moves, Nissan will most likely attract a lot of buyers to purchase the Leaf and possibly allow the vehicle to outsell the Chevrolet Volt in terms of sales.