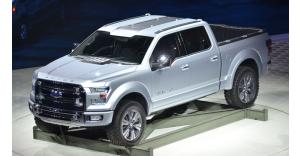 Many car experts have recently spotted a vehicle which they firmly believe as the prototype of 2015 Ford F-150 and this had happened in Dearborn, Michigan.

Based on the information provided by those who were able to see the prototype which car experts refer to as the “test mule,” it is quite obvious that what they believe as the 2015 Ford F-150 has taken a lot of styling cues from the Ford Atlas concept that was unveiled at the 2013 Detroit Auto Show.

The same sources have also confirmed that the upcoming version of the Ford F-150 will most likely hit the market with the aggressive-looking grille that has a similar shape with the ones that are found on the Atlas concept.

In addition to that, the test mule is also equipped with the vertical air intakes that were carried over from the current version of the F-150.