Significant Features of the 2014 Honda Odyssey 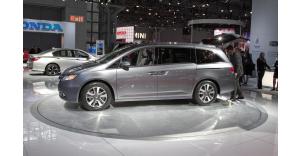 Honda has recently implemented a number of updates on the 2014 version of the Odyssey and such changes were responsible for making the vehicle become more exciting to drive compared to the model that it is about to replace.

Based on the information obtained from a number of reliable sources, Honda has only incorporated a few changes on the Odyssey’s exterior and most of the upgrades were concentrated under its skin. First off, all of the existing trims of the 2014 Honda Odyssey now come with 6-speed automatic transmissions and this particular tweak according to Honda was implemented to allow the vehicles to become more fuel efficient.

In addition to that, Honda has also done a great job in doing away with the traditional dashboard of the Odyssey. This simply means that the company’s vehicle developers and interior designers removed the conventional radio controls from the vehicle. These were replaced with two screens on the dashboard. The first screen seen on the 2014 Odyssey was still the one that was used on the 2013 model. However, the second was newest addition and this touchscreen is used to control the vehicle’s audio as well as the other systems offered on the Odyssey.

Although such changes could be considered revolutionary knowing that the previous version of the Odyssey looked outdated, many car experts are expecting that the changes will most likely provide the vehicle with a little impact since most of its closest rivals has already converted their conventional controls to touchscreen versions.

But despite of such comments, Honda is still confident that the changes made on the 2014 version of the Odyssey will boost the vehicle’s popularity to current buyers since the carmaker is also offering a number of useful additional items on the higher trims of the model. A good example of this is the availability of the rear entertainment system on the Odyssey’s EX-L trim.

Finally, Honda took pride in revealing that they also made a lot of improvements on the safety features of the Odyssey. The up-level models now have come with lane-departure warning system and the forward collision system as standard features. On top of that, the 2014 Honda Odyssey now comes with the rearview camera, a feature which is not common among minivans.