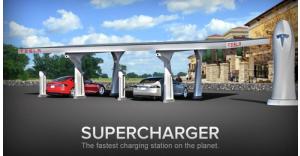 Tesla Motors has finally revealed the company’s first batch of supercharger stations that were built in different areas in California last September 25, 2012. These charging networks were basically built to help the owners of Tesla Model S who are planning to use their vehicles for long distance drives by allowing them to charge their EVs in these stations.

According to Tesla, the facilities that were currently opened in California are not just ordinary charging stations. This is because each of these are referred to as superchargers and these are capable of adding the needed charges that will allow a Tesla S model to obtain about three hours of drive time or possibly cover a maximum range of 150 miles. The good thing is that a supercharger could easily provide this charge to a single Tesla S battery pack by charging the vehicle for only thirty minutes.

Given its actual setup, Tesla’s supercharger stations could serve as a concrete proof that charging an electric vehicle does not always contribute to the increase in carbon emissions. Unfortunately, these supercharger stations were specifically built for the two variants of the Tesla Model S particularly the medium 60 kilowatt-hour version and the 85 kilowatt-hour model. Thus, these stations will only be beneficial to Tesla Model S owners.

These supercharger stations are currently found in Tejon Ranch, Hawthorne, Folsom, Harris Ranch, Gilroy, and Barstow. These were also scattered in strategic places in California so as to allow the Tesla Model S owners to travel between Las Vegas and Los Angeles, Lake Tahoe and Bay Area, and between LA and San Francisco Bay Area.

Finally, Tesla has confirmed that they are planning to build more supercharger stations all over the country next year. The car maker will also start building similar stations in Asia and Europe in the later parts of 2013.