The Most Fuel-Efficient Midsize Sedan in America 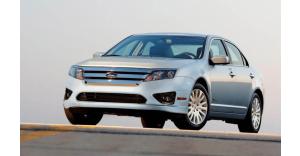 The latest version of the Ford Fusion Hybrid has recently achieved another important accomplishment, particularly in the fastest-growing midsize sedan segment by grabbing the title as the “most fuel-efficient midsize sedan model” in America.

The current version of the Ford Fusion Hybrid has started holding the title as the most fuel-efficient midsize sedan all over America when the Environmental Protection Agency or EPA released the vehicle’s official fuel economy ratings.

Given these figures, the Ford Fusion Hybrid has actually surpassed ratings that the Toyota Camry Hybrid has been holding for a few years now thereby grabbing the title as the most fuel-efficient midsize sedan model from the latter.

When asked as to how the Fusion Hybrid successfully gained the highest mileage ratings in the midsize sedan segment, Ford has pointed out that this was made possible by a number of technologies that the company’s engineers have used on the vehicle.

First off, the vehicle is powered by 1.6-liter EcoBoost engine which is equipped with the company’s patented “Auto Start-Stop System” that allows the Fusion Hybrid to save more fuel by shutting off the engine power in the event that the car is stopped. Secondly, the Fusion Hybrid is also using the SmartGauge technology which includes the EcoGuide function that serves as a coach for the driver in maximizing the vehicle’s fuel-efficiency capabilities.

Ford currently considers this recognition as a significant reward for the continuous efforts that company exerts in order to provide its consumers with safer, affordable, and fuel efficient vehicles.

Marty Bay is the Lead Writer and Editor for VPM Automotive. He has researched and reviewed 100s of cars, and writes extensively about car technologies.
Follow Marty Bay on Google+
This entry was posted in Camry, Ford, Fusion, Toyota. Bookmark the permalink.