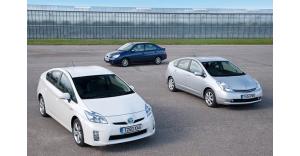 It was recently found out that Toyota has been dominating the hybrid car sales in California and the margin it posed against its closest competitors in the area continues to widen.

Based on the most recent information obtained by a number of reliable informants, the present statistics in California reveals that six out of ten hybrid car models purchased in the area were produced and marketed by Toyota. Such ratio reflects that Toyota actually holds about sixty one percent of hybrid market shares in California while remaining thirty percent were divided by Ford which occupies the second place, Chevrolet on the third place and the other hybrid car makers who are also selling their products in the area.

When asked to comment on this trend, Toyota revealed that the company was able to sell about 5.3 million hybrid vehicles all over the globe and 2 million of these were sold in the US which also includes the state of California. Given such volume, Toyota could possibly claim that they are indeed the global leader when it comes to volume of hybrid cars sold all over the US and even in the global realm.

According to a lot of car experts, Toyota’s dominance in hybrid car sales in California and the rest of US actually started in the year 2000, the same exact year when the Japanese carmaker introduced the first generation Prius to the market.