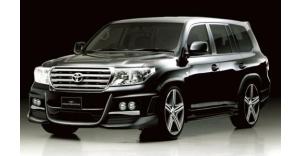 Toyota has finally decided to implement a major facelift on the 2014 version of the Land Cruiser, a move that most car experts believe that was triggered by updates that were conducted on its more luxurious cousin in North America which is the Land Cruiser Prado and the 2014 Lexus GX.

According to the information obtained from a number of reliable sources within the company, the 2014 Land Cruiser will most likely be debuting with a number of revisions on its exterior and interior features. In addition to that, the vehicle will also come with an upgraded set of safety features and technologies. However, the 2014 version of the Land Cruiser will still be powered by the 3.0-liter turbocharged diesel and 4.0-liter petrol engines.

The same set of sources also revealed that the most significant change that the buying public would be seeing on the 2014 Toyota Land Cruiser is its redesigned front end. The sources explained that the upcoming version of the Land Cruiser will hit the dealerships with the teardrop-style headlight clusters wherein the LED daytime running lights would be incorporated.

In addition to that, the 2014 Land Cruiser will also feature the halogen or LED headlamps along with the reworked bumper and hood designs and a relatively wider grille which is equipped with bigger chrome fangs.

Aside from the information shared by the reliable sources, Toyota has also confirmed that the 2014 Land Cruiser will be equipped with the new tail lamp clusters that feature a red and clear lens along with a more prominently-garnished license plate. In addition to that, Toyota explained that the 2014 Land Cruiser will be riding on the 17-inch and 18-inch alloy wheels. The upcoming vehicles will also available with unique exterior colors such as the Attitude Black Mica, Dark Green Mica, Bronze Mica Metallic, and Dark Blue Mica.

Under the skin, Toyota pointed out that the facelifted 2014 Land Cruiser will be equipped with an all-new off- as well as the on-road driving control switch panel, a new upper panel for the center console and the Optitron meter design that features a 4.2-inch colored TFT multi-information display.

Marty Bay is the Lead Writer and Editor for VPM Automotive. He has researched and reviewed 100s of cars, and writes extensively about car technologies.
Follow Marty Bay on Google+
This entry was posted in Land Cruiser, Toyota. Bookmark the permalink.