Toyota Increased the Price of the 2014 Tacoma 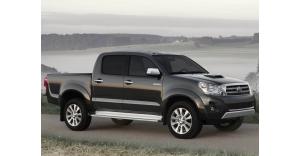 Toyota has recently revealed that the company has implemented a modest increase in the price of the 2014 version of the Tacoma.

Based on the information obtained from the carmaker, the base model of the 2014 Toyota Tacoma will be sold at a starting price of $18,735 including the shipping charge of $860. Given this price, Toyota explained that the 2014 version of the Tacoma is about $250 pricier than the previous year’s model.

In addition to that, the carmaker also shared that the price of the top-of-the-line model which is the 2014 Toyota Tacoma Double Cab 4×4 V6 L/B will start at $29,145 including the destination charge of $860. This reflects a $100 increase over the price of the model it replaces.

Although the 2014 version of the Tacoma is considered as a carryover, Toyota explained that the vehicle has actually obtained a few improvements. Toyota has also pointed out that the current model of the Tacoma will be available with two new exterior colors which include the Blue Ribbon Metallic and the Silver Sky Metallic.

Aside from the standard features offered on the 2014 Toyota Tacoma, the carmaker hinted that this could also be had with the optional SR appearance package. This package adds a number of features on the vehicle such as the upgraded door handles, overfenders, upgraded bumpers, mirrors and grille surround and smoked headlight lenses. When equipped with the V6 engine, a Tacoma with the SR appearance package gets the foglights.

When compared to the price of one of its closest rivals which is the 2013 Nissan Frontier, the Tacoma can be considered as a cheaper option since the Frontier is sold at a starting price of $22,785 including the destination charge of $845.

Marty Bay is the Lead Writer and Editor for VPM Automotive. He has researched and reviewed 100s of cars, and writes extensively about car technologies.
Follow Marty Bay on Google+
This entry was posted in Tacoma, Toyota. Bookmark the permalink.