Toyota Prices the 2014 4Runner and the Tacoma 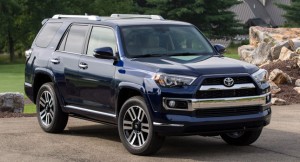 Prior to their release into the automobile market which is scheduled on the later parts of this month, Toyota has announced the pricing information of the 2014 Tacoma truck and the 4Runner SUV.

Compared to the prices of the 2013 versions, the 2014 models of the 4Runner are more expensive. This is because Toyota has implemented a mild facelift on the vehicle. Such updates made the vehicle look more rugged in front. In addition to that, Toyota has also equipped the 4Runner with a new set of LED taillamps along with a number of trim updates on its exterior.

Inside, the 2014 Toyota 4Runner has also received the new Optitron instrument panel and an all-new multi-information display. The appearance of the 4Runner’s cabin was also enhanced by the company’s use of more upscale materials and upholstery.

Under the hood, the 4Runner is still powered by the same 4.0-liter V6 engine which is capable of producing a maximum power output of up to 270 horsepower. The engine is mated to a 5-speed automatic transmission. The 4Runner can also be had as a rear-wheel 4×2, part-time 4×4 or with a full-time multi-mode 4×4 that features a locking differential on the center.

Aside from such information, Toyota has also revealed that the 2014 Tacoma will be sold at a starting price of $17,875 plus the $860 DPH fee. The current starting price of the 2014 Toyota Tacoma only reflects a mild increase since the truck is considered as carry-over model.

To make the Tacoma look refreshed, will be offering two new exterior colors for the vehicle. These include the Blue Ribbon Metallic and the Silver Sky Metallic. Aside from that, the upcoming version of the Tacoma can also be had with the SR appearance package and the four levels of the Entune Audio.

Marty Bay is the Lead Writer and Editor for VPM Automotive. He has researched and reviewed 100s of cars, and writes extensively about car technologies.
Follow Marty Bay on Google+
This entry was posted in 4Runner, Tacoma, Toyota. Bookmark the permalink.