Volkswagen Shows the e-Golf and e-UP! off 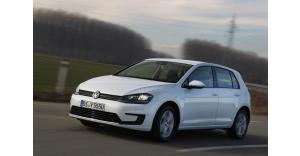 Despite of the fact that the vehicles are scheduled to be unveiled at the Frankfurt Motor Show, Volkswagen has chosen to reveal some of the most significant features of its e-Golf and e-UP!.

According to the information provided by the German carmaker, the e-Golf and the e-UP! that are set to debut at the Frankfurt Motor Show will be introduced into the market as full-electric vehicles. The carmaker also explained that both of these cars were the product of the Volkswagen increased efforts in developing vehicles that would run on alternative power sources instead of utilizing the conventional gas-powered engine.

In addition to that, Volkswagen has also stressed that the e-Golf and the e-Up! were two different vehicles and these were designed to provide a different driving range. Based on the German carmaker’s accounts, the e-Golf comes with an 85 kW/115 PS electric motor which is capable of producing up to 270 Nm of torque. The carmaker also shared that with such a power source, the e-Golf is capable of accelerating from 0 to 100 kilometer per hour in 10.4 seconds, a time which could be considered quick for an electric vehicle. This is also capable running at a top speed 140 kilometers per hour. With its consumption which is estimated to arund 12.7 kWh for every 100 km, the vehicle is expected to provide a maximum range of up to 190 kilometers.

The e-Up! on the other hand according to Volkswagen features a 60kW/82 PS electric motor which is designed to generate a maximum torque of up to 210 Nm. With this powertrain, the e-Up! was able to accelerate from 0 to 100 kilometers per hour in 12.4 seconds. This is also capable of running at a top speed of 130 kilometer per hour. Compared to the e-Golf, the e-Up! is equipped with a smaller battery. Due to its smaller batteries, the e-Up! is only capable of providing a maximum driving range of 160 kilometers.

Finally, Volkswagen has shared that both of these electric cars will be sold just like an ordinary Volkswagen model. This will be offered with standard features such as the automatic climate control, navigation system and LED running lights.

Marty Bay is the Lead Writer and Editor for VPM Automotive. He has researched and reviewed 100s of cars, and writes extensively about car technologies.
Follow Marty Bay on Google+
This entry was posted in Hybrid & Electric Car Facts, Volkswagen. Bookmark the permalink.